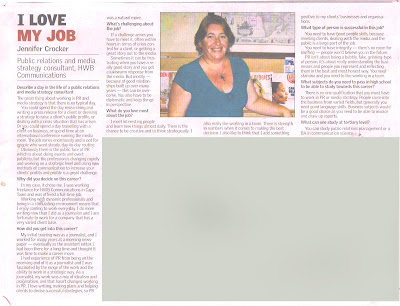 Click on the article to enlarge.
Posted by HWB Communications at 1:20 PM 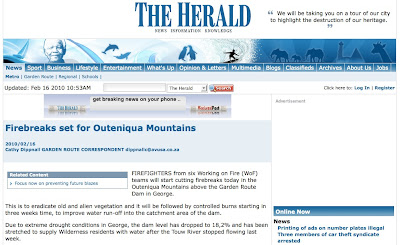 FIREFIGHTERS from six Working on Fire (WoF) teams will start cutting firebreaks today in the Outeniqua Mountains above the Garden Route Dam in George.

This is to eradicate old and alien vegetation and it will be followed by controlled burns starting in three weeks time, to improve water run-off into the catchment area of the dam.

Due to extreme drought conditions in George, the dam level has dropped to 18,2% and has been stretched to supply Wilderness residents with water after the Touw River stopped flowing last week.

Eden disaster management head Gerhard Otto said yesterday it was decided to use the extra WoF teams brought in from KwaZulu Natal and the Free State last week to help contain fires between Bitou and Still Bay.

Read the full text of this report at http://www.theherald.co.za/article.aspx?id=531642

Posted by HWB Communications at 11:46 AM 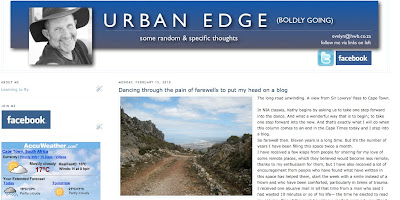 Evelyn Holtzhausen's fortnightly column from the Cape Times has moved to its own online home. Follow Evelyn's thoughts at this blog address:

http://evelynjh.blogspot.com/
Posted by HWB Communications at 11:43 AM 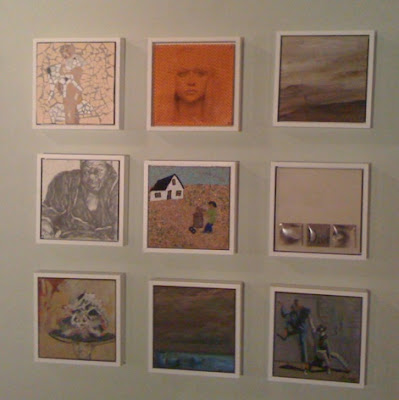 Spier Wines last night debuted its Creative Block wines to the Cape Town media. Creative inspiration for the branding is taken from Spier's patronage for the arts. Guests were invited to assemble their own collections from the range of unique blocks of art - all created under Spier's tutelage. 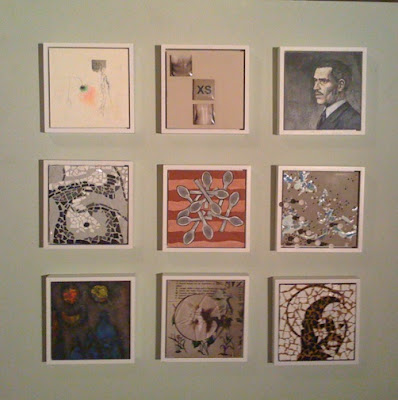 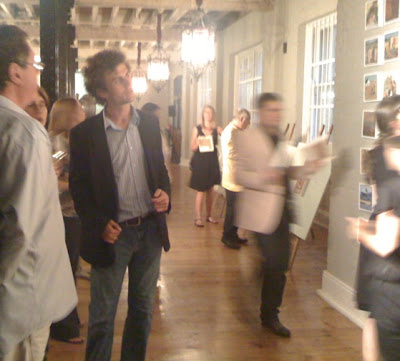 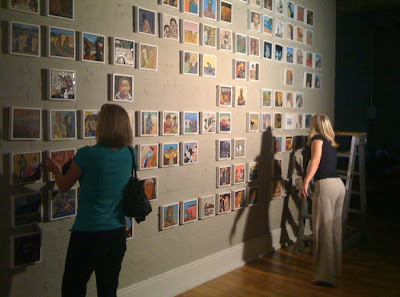 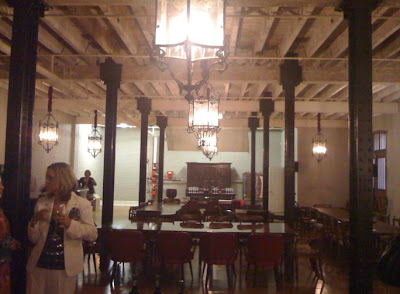 Posted by HWB Communications at 8:59 AM

Compassion fatigue. Can you believe it ? What next?

I heard the term for the first time this week. I don’t think that Mother Theresa ever got it, but then she was a Saint. Or did that only happen after she was so totally compassioned out that she had to leave the planet? I suppose you get it from being too compassionate or maybe for being compassionate for too long. I am not sure that there are degrees of compassion. Its like you cant be half pregnant, either you are or aren’t.

The more, it seems, that more we move away from responsibility for our actions the quicker it appears that labels are invented to legitimise whatever behaviour it is that we elect to adopt.

My mother was once asked whether she knew that I was attention deficit, or had ADD, because I am always on the move. “No,” she replied “ there is nothing wrong with Evelyn, he has always had ants in his pants.”

Ants in the pants, or an ant in the pant, as they may say in Cape Town, transforms from a quirk into a deficit with the simply addition of a label. On the plus side I suppose labels do provide us with guidance in getting a grip on things that go bump in the mind and which are often than not a lot more difficult to grasp than herding cats.

Vegetarian is also a label. For me a few days ago it translated directly into a reduction of stress. There I was paddling off Blauberg beach with John in the back of the kyak when I noticed a huge rock ahead of us. ”That rock wasn’t there last week” I remarked as I dipped my paddle into the icy water. “Because it’s not a rock,” said John. “It’s a whale, with a calf!” “But don’t worry, “ he added as my shoulders hunched with tension, “ Whales are vegetarian” So we kept our distance, playing “find the whales” as they disappeared underwater then remerged here and there for a puff of air.

And what awesome experiences to be so close as to hear a whale breathing. Reason enough I would argue never to suffer awe fatigue.

Carolyn, who knows these things, read from a book on the subject after I told her of my encounter. “If whale shows up,” she read, “ it means express yourself through your voice by singing, humming, or chanting simply the pure joy of doing so…”

Indeed. I recalled a moment of joy recently when the group with whom I was hiking stopped at a secluded waterfall in Table Mountain National Park.The water falls down a steep rock face into a funnel-like gorge creating a wonderful echo chamber. Yoga teachers, say that the chant of Aum, calms the mind, it is the the sound with which the universe vibrates. So we did that at the foot of the waterfall. It was a wonderful uplifting spiritual experience.

Compassion fatigue, I wonder, does that mean we get too tired to care ? I hope not.